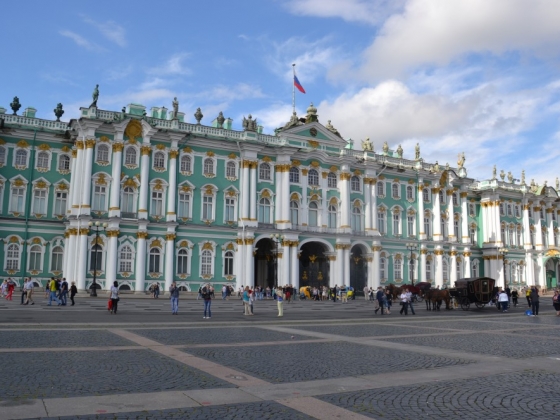 So, I wanted to go to bed early today, but considering that it’s past twelve o’clock and I still have to start writing my blog that obviously didn’t quite work out.

After I wrote my blog yesterday I suddenly realised that I still had to make my homework. It was only one exercise but when it’s already two o’clock in the night any number of exercises is too much. But hey, I’m a diehard so I did it and then went to bed.

Of course, that did not work out quite too well in the morning. I wasn’t a vampire but a zombie when I got up and I have been all morning. But, it was absolutely worth it. I still enjoyed the musical for a long time after and am enjoying it still actually.

So, luckily the teachers here are great. When I told Maria about yesterday and that I didn’t sleep much, she immediately said we could always watch a Russian movie because it wouldn’t require much activity from my side. Brilliant, right. We first just read some texts about regions/cities in Russia which all seemed like beautiful places. And then we read some more texts like newspaper articles and the story ‘a Caucasian prisoner’ by Tolstoj. So, that was nice.

And then I had a break and Miriam just happened to be on the corridor as well, so we talked some more about yesterday. And then Will and Camille joined us as well. We talked about a lot of things, but somehow we managed to always add a reference to vampires in whatever we were talking about. For example, we were talking about how to travel in America, Los Angeles, because that’s where Will lives and he was saying that if they agree to meet up with friends they always like call which roads to take and which ones not. So I said a helicopter would be a practical device, because then you don’t have traffic jams. And next: it would be even better to be a vampire, because you could turn into a bat and wouldn’t have to worry about where to park your helicopter! It was just funny at the time. And then there were more references to coffins and vampires and that kind of stuff. It was just really funny.

And then it was time for the second half of my class, which was fair enough considering the fact that my break lasted almost half an hour. After the break we then indeed did watch a movie. I don’t know the title anymore, but it was really funny. It was about an engineer who was working on a time machine. He opens a gate to the time of Ivan the Terrible. Now, in his time there is a guy who looks a lot like Ivan the Terrible, and as you can guess, they switch times and then the gate is closed and the machine broken and the engineer needs to buy a new piece before he can get the machine to work again. So, in the end the engineer gets the piece, repairs the machine and the two men switch times again and then it turns out it was all a dream. It really was a hilarious movie.

And then Maria corrected my homework. I had done it well, but I had made some stupid mistakes like writing the ‘you-form’ instead of the ‘he-form’. I guess it was because of the late hour and the excitement after the musical. She was so kind not to give me any homework today. How come Russian teachers here are so much nicer than Russian teachers in Belgium? Well, I of course can only speak about the two Russians I had as teachers, but still.

So, then I went back home. I had wanted to go out and go somewhere, but I was so tired I really didn’t have the energy and when I got home Tom and Kasper were talking in the kitchen so I joined them and then later on Camille joined us as well. Kasper had to go to class then, but the three of us still sat talking for a long time after, so then I barely had any time to still go somewhere. But, for things like these I don’t mind not visiting something. The fact that there’s so many things I still want to see gives me lots of reasons to come back very soon! And that I like.

And then it was time to go to the city centre for my last private session with Sasha. It was great weather, so she said we could first visit the Church of the Savior on Spilled Blood. Eventually it turned out they only had a reduction for Russian students and I would have to pay 250 rubles to visit. It is not that much, but Sasha bought a ticket for me, because it was free and waited outside herself as she has seen it many times already.

The church is really impressive to see on the inside. It is all mosaic, it’s really beautiful and just amazing. Someone there must have had a lot of patience, but thank God he was because the result is really great. It was definitely worth paying zero rubles for :p

And then we walked to the Neva. As there soon will be a parade on the Neva there were warships lying there. Eventually it turned out to be only two ships and a submarine. It was nice to see, but well… it was a pity there weren’t more ships. We were lucky to see the crews practicing for the parade, so they were all standing on the decks in uniform which was great to see. The crew from the submarine stood on the submarine, which led to the joke that it looked a little like one of those games at a fair: You get five balls and if you can throw them all of, you may choose a price. You’ll see on the pictures that it really looked a little like it.

Then we walked some more, we walked to the Isaacs cathedral. I would have wanted to climb the tower, but the row was quite long, so in the end I didn’t. it is one of the reasons I have to come back soon.

And then we went for a drink. It was a little weird because we had to wait very long for our drinks to come, though it seemed as if they could read our minds because when Sasha told me that it had been quite a while already at once our drinks were there. And then they couldn’t bring the bill soon enough and after two minutes the guy came to see if we had already put the money down. We didn’t, we were still drinking for god’s sake and I’m not parting with my money any time sooner than necessary. The poor guy had to wait another couple of hours I guess before he got his money.

Kasper joined us then sometime after and we just sat talking some more, sitting there, having fun.

Man, I love this city so much. It has bumped Moscow away from that first place and really, the longer I’m here the further behind Moscow gets. I had a great time in Moscow, it was brilliant, but this is just even so much better and that really means a lot. Saint-Petersburg is just an amazing city. I love it here. You know, I think in Moscow I was just especially lucky with the group of students that were there with me. It’s a nice city, but compared to Saint-Petersburg, well, it just doesn’t compare. The city is just more pleasant to live in and all the others things that were great in Moscow I have here as well. I just like this city more.

On our way back home Kasper and I stopped at the supermarket to get something to eat. Really, you have to be a student living in an obshizjite to eat dinner at an impossible hour like half past twelve in the night. Luckily, I don’t have another class at nine o’clock tomorrow, so I can sleep a bit longer. I really think I can use it.

But hey, as I have said repeatedly it is so worth it. It’s not just having a short night this night. I’ve noticed that I can’t really get fully rested anymore for a while now. It’s just that your days here are so full. There’s class, excursions, private sessions, sightseeing in your spare time as well, speaking a lot of Russian which was especially tired during the first days and an awful lot of walking around. I really thought your feet get used to lots of walking, but apparently they don’t, or maybe not when you walk this much. Every time I move one feet they start to hurt so much. But, we keep on going. I’ll sleep when I’m back home. I want to get everything out of this journey I can and if that means pushing myself forward well then so be it. Too bad I’m tired, I’m in Saint-Petersburg, seriously, give me one good reason to waste my time by sleeping any more than is needed to keep me going?

Well, tomorrow I have my last four hours of classes. It’s so sad, I like those classes and time went so fast, it’s so strange. The fact that we have so much things to do here is probably kind of the reason. And after class were all going to eat something together. We don’t know where and when yet, but as long as we got mobile phones that doesn’t really matter, right!

And then there’s only one more thing to say before I go to bed and that is: The weather was great today. It was really sunny and very hot. So, the weather has gotten great again. As it should be!